9/24/18 – WHAT A SUNDAY PART III – On September 20 I posted about this very little kitten who was attacked by a dog and couldn’t use her back legs. She was immediately taken to the vet where x rays were taken; no breaks or fractures were seen. She was given antibiotics and steroids. The next day Putty, under the care of our friend, Debbie, was starting to stand on one of her legs but the other leg was still just ‘hanging’. Although the veterinary staff thought Putty was feral, it became obvious by the next day that this little girl was just traumatized and in pain. Foster mom, Debbie, took the opportunity to examine her leg and found what appeared to be a deep bite wound. Putty was then taken to another veterinary hospital where not only that wound was treated but another bite was found and treated. On Saturday, now under the temporary care of our friend, Debra B., the deep wound opened and Putty was taken to the emergency hospital. Putty’s leg was very swollen and the wound was very infected; Putty also had a fever. She was again treated, her wound was bandaged and Putty was kept at the hospital for a few more hours. When Debra picked up Putty she was advised that the bandage would require professional changing every day. On Sunday, Gina was called in to duty. More antibiotics were applied and Putty will be seen where Gina works so that the bandage can be changed. We were told that this may have to be done over the next week or two. Please pray and send positive energy for this little girl. If we can’t get her infection healed, she could lose her leg. I’ll keep everyone updated. ~ diana 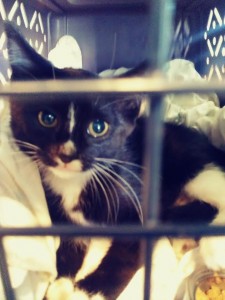