Pepper was left outside to fend for herself after her owners “packed up and left” in August. The neighbor had been feeding her and letting her into her home on cold nights. The neighbor had taken Pepper to Animal Control where it was found that she had been chipped but the owner’s information was not registered — although, quite frankly, why would anyone want to return this cat to an owner who kicked her out. She was spayed in July and turned into Animal Control in September and was now back on the streets.

She is super friendly although a little thin. There are a few people interested in adopting her (paws crossed).
And, as someone recently said, 4 Paws 1 Heart (and our supporters) were there to make sure that Pepper would be physically ready for her new home. Prayers that Pepper finds that forever, loving, and permanent home. ~ diana 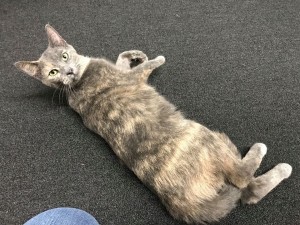