11/19/18 – Please say a prayer for Feebe and send her some positive energy. Three weeks ago I received the following message. Upon receiving this call for help, I immediately contacted Dr. Z of Orion Animal Hospital so that she could take on the case.
“This is Feebe and she showed up on my porch late evening on October 29th. I took her to All About Animals 1st thing the next morning on the 30th. At that time I was told she has infection all over. The main one was the pyometra and she has something going on inside of her mouth. They gave her a 10 day antibiotic shot and treated her for the fleas and ear mites. At that time she only weighed 4 pounds and they said she was between 1 and 2 years old. I don’t believe she is feral because I have had no problems handling her and I had to syringe fed her for the first 3 days and then she finally stared eating in her own. She has never tried to bite or scratch me. I think she is more of a stray cat. I did talk to a neighbor and she said she’s been sick for awhile now but they did nothing to help her. For the most part I know all my neighborhood cats because I’ve TNR’d them all and I had never seen her before she showed up that night and I believe had she not found me she wouldn’t be here today. I’m going to attach 2 pictures and the 1st one was taken the morning I took her into AAAB and the 2nd one was from 2 days ago. This morning she had puss coming out of her mouth again and that wasn’t there last night when she went into her crate. So that has me a little worried. She is still eating (hard and soft) food and she’s drinking and using the liter box – Danielle”

Feebe met with Dr. Z on two occasions and it was determined that Feebe did not have pyometra but she had many other issues. The following is the latest report until Danielle speaks with Dr. Zalac again this week.

11/13/18 “Good morning Di,
I just wanted to give you a little update on our Feebe. I was able to take her back to All About Animals yesterday and they redid the combo test for me free of charge. Their results were the same as before. Positive for FIV and negative for FelV. If I’m not mistaken she ran the test through twice and had the same results both times. My girlfriend offered to pay for another one to be done at her vet if you think we should. We do go back to Dc.Z this coming Wednesday so I will talk this over with her too and get her advice on what I should do. So right now we’ve had her combo tested 3 (possibly 4) times and the results have been the same at both places. All about animals has shown negative for the FelV but positive on the FIV and Orion animal hospital showed positive on both but negative on FIA (I believe that is what that one is called, to make sure it hasn’t moved into her bones).
She is having a harder time getting better this time around. She finally started eating on her own last night. There isn’t as much drainage coming out of her mouth and her eyes finally look better. She still has fight left in her little body and as long as she has fight left, I will fight for her. That little girl stole my heart and there was a reason she found me.
I’m not sure if I told you already but I spoke with Leona from Leuks landing and I have Feebe on the waiting list (she has to be positive for both tho). So if I’m not able to adopt her out to someone we have that as our backup plan. I will NOT put her back outside and if anything she can live in my basement for as long as she needs to. I’m still keeping her secluded down there so she can get the rest she needs. I think if I left her out of the crate she wouldn’t rest as much as she does in her crate. And I know the calici virus is very contagious so I don’t want my other kitty down there getting it. I do spend a lot of time down there with her right now so she isn’t in the crate all the time. My basement is finished so it’s not that cold down there this time of the year and when I’m down there I run my space heater for her.
I will keep you updated on what is said and done when we go back to Dc.Z on Wednesday.
Thank you, Danielle”

This is one of the many serious cases that 4 Paws 1 Heart has been asked to help with over the past couple of months. Many thanks to our supporters for helping us make a difference. ~ diana
4 paws1heart.org/donations/ 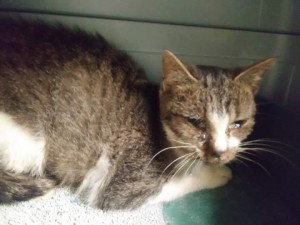 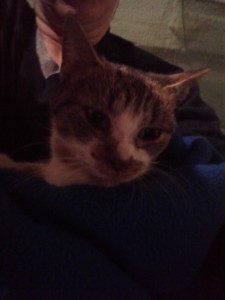