12/7/18 – It took almost 8 months to get this little guy but finally it happened. As always, we are so happy to not only get another animal off of the dangerous streets but to also make sure they never procreate again. I have to share the ‘harrowing’ experience of the rescuer when he finally tried getting Herman to the vet. Herman has since also been neutered. ~ diana

“I attempted to wrangle Herman into the too-small-for-him plastic pet carrier I have but it’s difficult to do by yourself and it was easier to get him into a larger cardboard one I had instead. I get him loaded into the car and head off to the vet to get him vaccinated and a general check-up.

Not even a mile down the road, he is busting out of this thing like that little creature coming out of that dude in the movie “Alien.” He literally clawed his way out of the side of it and hops up onto the passenger seat. His mouth is half-open and he is completely wide-eyed as if to say, “WHAT IS THIS AND WHERE THE HELL ARE YOU TAKING ME?!?!”

Deep down I am freaking out but actually kind of impressed at the same time. This little guy really showed me something today and it’s probably why he survived outside during last year’s brutal winter. I continue on to to the vet because at this point what the hell else am I going to do and he retreats to hiding underneath the driver seat.

I get to the vet and explain the situation to the receptionist. They hand me a cardboard shipping box and shrug their shoulders. I go back out to the car and climb into the back seat. I had planned ahead just in case something like this happened and brought a small bag of treats with me. Eventually I’m able to coax him out, wrestle him into this box that was not made to carry a live animal and into the veterinarian office. The whole thing was a blur and now I am covered in cat hair.

Once inside, Herman started to calm down quite a bit while hiding under a chair in one of the exam rooms. According to the doctor, he was very well behaved when she took him back to get his shots and get his blood drawn. All his tests came back negative, which is great news.

He’s back home now and safely resting upstairs in the guest room. I’m just glad he’s healthy, will soon get fixed and he’ll live out the rest of his life in the comforts of a forever home (after today, I don’t think I can adopt him out-LOL).

This is fittingly how I spent National Cat Day. – Jeffrey”😹 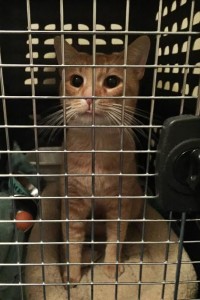 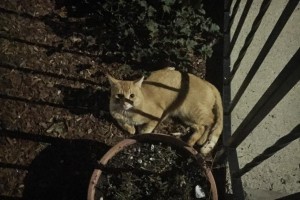 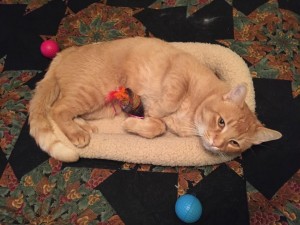