12/7/18 – Toots, who was found limping in the driveway of a friend of 4 paws 1 heart, had surgery yesterday. After seeing two doctors, it was determined that Toots should see a surgical specialist. After the specialist examined Toots, two options were given to us — amputate the leg or have surgery to put in a plate and screws to join the broken bones together. We chose to not amputate — as the doctor said “You are 4 Paws 1 Heart, not 3 Paws 1 heart — and to approve surgery because the doctor was very positive about the outcome. Toots is a young adult, and he has already found his way into the hearts of several people, including his rescuer. His surgery was successful and the doctor believes he will be as good as new in about 8 weeks. It is only because of our recent matching campaign that we were able to pay for this surgery in that it was much more than we could normally afford. Toots is another animal, amongst many, who will have a second chance at life because of our generous and loyal supporters. ~ diana
4paws1heart.org/donations/ 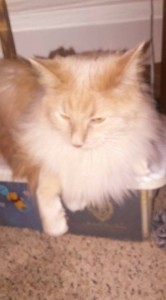