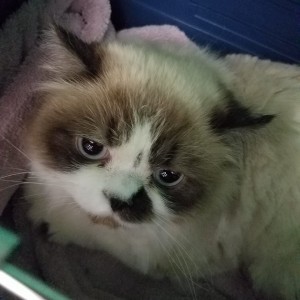 When I went to work this morning I told my co worker that I had this feeling I’d be taking an animal home today. Three hours later I was contacted about a cat emergency.
Now he is at home with me…
A few days ago he and his canine housemate were thrown outside to fend for themselves. Yes, this is the sick world we live in and the only saving grace is that both animals were rescued by Good Samaritans before freezing to death. A trap was set to catch this kitty but the rescuer couldn’t hold onto him.
I have this little guy and someone else rescued the dog.. 4 paws 1 heart will cover medical but right now he is very scared and in need of love and rest. There is an area on his ear suspicious of frost bite, but he could have died.
I will never understand the EVIL… Please Say prayers. My co worker suggested the name “Vortex”. Gina♡