4/19/19 – We were so thankful that we could be there for this very neglected and abused dog. Thank you Cortney and Rachel for rescuing him. – diana
4paws1heart.org/donations/

“This is Koma, he was rescued on March 21st from an abandoned house that was being cleaned out. A friend of Rachel Gerstner called her and asked if she could help, that’s when Jen and I were contacted. His chain was so short that he couldn’t lift his head, his empty, upside-down food bowl, feet away from him. No shelter, nothing. We didn’t know how long he had been there, but we knew we had to do something, when we got closer, we realized Koma had multiple bite wounds, both old and new. I agreed to take him in and Jennifer Moore swooped in to the rescue and went out to get him.

He got a bath that night, witch the help of a good friend of mine Lynae Smith which showed that his wounds were much worse than they appeared, they were so caked with dirt and debris that once cleaned, began to ooze infection. We contacted the WONDERFUL 4 Paws 1 Heart and of course they were more than willing to take on his bills. We went to the vet as soon as they could see him. Koma had to have most of his body shaved to locate other wounds, sedated to have the wounds debrided, he also had to have a drain tube placed in his shoulder. Then, the recovery started, both physically and mentally.

When Koma came to me he had terrible separation anxiety and would scream, he had broken out of crates, rooms with the doors closed, gated rooms, until he finally realized…… I came back for him, every time. He learned to love toys again, he loved my son tremendously. He was very protective at first and worst part was, we couldn’t post him because Koma had a microchip, he was adopted from the Michigan Humane society in April of 2017.
That is a whole different story, one that no longer matters and is now his “old” story. Koma finally became legally mine (not to keep, but to adopt to the perfect family).

Koma is now in a wonderful foster home, with Kasha Morgan and her family and he is flourishing. He will be available for adoption very, very soon. Koma is a 3 year old, Neutered Male, good with cats, kids, other dogs, all with proper introduction of course. I was able to find out that he was an owner surrender to the Humane Society and had other doggy friends there. He has been around my cats, and LOVES my son, along with all of the boys in his foster home. We will not be next in line to fail this handsome boy and we couldn’t have done it without everyone that helped. – Cortney” 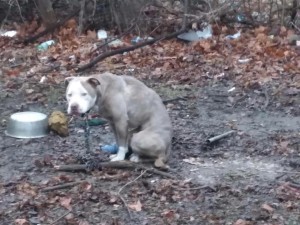 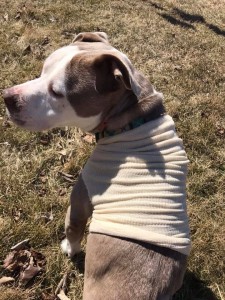 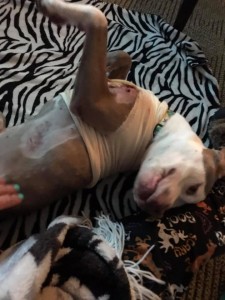