10/15/19 – Prayers for Miracle — Ask anyone in rescue and they will tell you the same — this has been a terrible time for cats/kittens. This is Miracle. He is 12-14 weeks old and was rescued late last week. He is very tiny for his age and was found very emaciated and at times lethargic. He’s been on fluids and yesterday he was taken to one of our partner vets. His rescuer said that he seems to go in and out of awareness and his head started bobbing. Upon examination the doctor found that Miracle has an ear infection and his glucose level was higher than normal. He also may have cerebellar hypoplasia (CH) which is a neurological disorder that occurs when a cat’s brain did not develop properly in the womb. The cerebellum is responsible for coordination, spatial awareness and fine motor skills. This is the second cat in a week that we are helping who is suspected of having this disorder. We don’t know for sure if the ear infection is causing Miracle’s issue or if it is CH. Miracle is on antibiotics right now and is holding his own although not improving. He continues to be on fluids. Miracle came from a mobile home park where there have been an overwhelming number of stray cats/kittens. Today six more went in for TNR (trap, neuter, return) which will be covered by 4 Paws 1 Heart. Without our supporters and are rescuers, we could not make a difference for these innocent animals. ~ diana 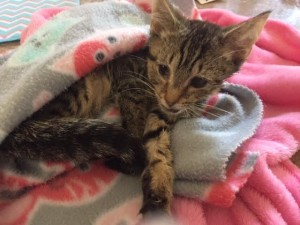