9/26/19 – RIP Syeera. She was found during a recent severe thunderstorm, a little over a week ago. She was extremely thin, wet, sick, and walking in circles. The woman who found her couldn’t leave her like that but also couldn’t take her inside because she has 3 large, cat-unfriendly dogs. So, she put Syeera in a large crate with food, water, and litter box but the crate had to be kept outside under an awning. Long story short, a person who transported her to the vet, decided she couldn’t stand thinking of Syeera in that crate and went back and got her. While in Danielle’s home, she realized that Syeera must have recently had kittens because there was still milk in her breast nipples and she was just so skinny. Syeera had been given antibiotics for her upper respiratory infection and seemed to be getting better but then she took a turn for the worse and arrangements were made for her to see one of our favorite veterinarians, Dr. Z at Orion Animal Hospital. Unfortunately, Syeera never made it to the appointment. The night before she began to have seizures and was taken to emergency. It was decided to let this very sweet girl cross the Rainbow Bridge. May God be with all of the animals out alone on the streets and be with the rescuers who try so hard to save lives. The heartbreak is overwhelming but they continue to do it, day in and day out. ~ diana
4paws1heart.org/donations/ 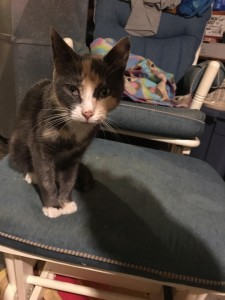