2/15/19 – RIP BANDIT – The life of a feral cat, expecially a black one, is not an easy one. Bandit was a member of a cat community who showed up one day limping. We authorized x rays with one of our partner vets. The vet examined him and took x rays and said that there was nothing wrong with his leg; he thought Bandit may have jumped on it wrong. A few days later and Bandit was not improving so the community caretaker/rescuer took Bandit to another vet who took another x ray. Unfortunately, this x ray showed a shattered vertebrae, possibly the result of being hit by a car. The rescuer made the decision to put Bandit out of his pain and had him humanely euthanized.. This posting is not to condemn the first vet who saw Bandit just a learning that sometimes you do have to go with your gut and get a second opinion. If only they could talk to us. But also, please understand that options for feral cats are much less than with domestic cats. – diana
4paws1heart.org/donations/
P.O. Box 84, St. Clair Shores, MI 48080 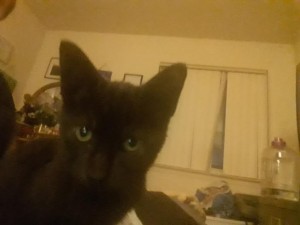