12/13/19 – RIP Sweet Newman. A long-time friend of 4 Paws 1 Heart and a lover of any animal, contacted me about a month ago asking if we could pay for a stray cat to be neutered. Unfortunately, this feral guy was elusive and then he stopped coming around for about two weeks. Yesterday he showed up in her mud room and after feeding him, she was able to trap him. Sadly, in that month he got very beaten up. His eyes were almost closed shut from an obvious upper respiratory infection and he appeared to be deaf. It was determined that even if the infection could be cleared, he could not live outside in his condition and could not be socialized. He went to the vet this morning and was humanely euthanized. He is in a better place where he will not be prey for other animals and humans. ~ diana
4paws1heart.org/donations/
P.O. Box 84, St. Clair Shores, MI . 48080 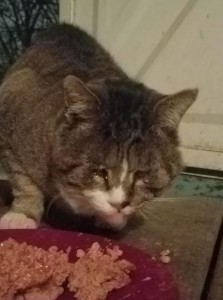