1/24/20 – RIP Deevo. As our followers know, we feel every animal (and human) deserves to be remembered when they leave this world. And, once again, it was humans who failed this very sweet little guy. On January 21, a friend of 4p1h intercepted Deevo when his ‘owner’ was going to take him to a local, high-kill municipal shelter. Yesterday afternoon I received an emergency call because Deevo had a seizure. Unfortunately, the rescuer did not have transportation and while we all worked to make that happen, Deevo continued to have seizures. With the help of Kimberly Willey, an amazing animal advocate, and the rescuer, Deevo was taken to an emergency hospital where he was immediately put on medications for the seizures and tested for distemper. Heartbreakingly, the seizures could not be stopped and Deevo passed during the night. The distemper test is still being processed and we should know by next week if it was distemper that killed this puppy. Distemper is highly contagious and it is why it’s so important that every animal be vaccinated. I’m sure he was the result of a backyard breeder and maybe was going to be ‘dumped’ because there were signs of medical issues already. We will never know but we do know that many tears were shed this morning. – diana
4paws1heart.org/donations/ 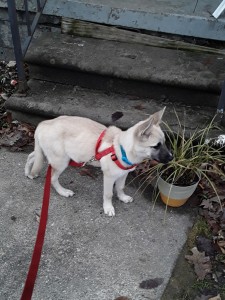