2/6/20 – Meet Mouse. His story started December 30 when I was originally contacted. Mouse showed up on a young man’s porch; the pitiful cat had obvious medical issues with his eyes and ears. It turned out that Mouse was one of 40 cats thrown outside after the resident moved. We approved to have Mouse seen by one of our vets who treated Mouse for an upper respiratory infection and who also saw that Mouse had a polyp deep in his ear. Mouse has had two surgeries since. The doctor was able to get most of the polyp out but because of the depth, wasn’t able to get all of it. (Prayers that it doesn’t grow back.) Mouse had also been drooling and when his mouth was examined during surgery, the doctor determined that 6 teeth needed to be extracted. Mouse is scheduled to be seen again in two weeks. We are hoping more teeth will not need to be removed.

This poor little guy has been through a lot but with the miracle of human touch and love, he is becoming very social and sweet. Although this case was much more than expected, we will see him through to whatever he needs. ~ diana
4paws1heart.org/donations/ 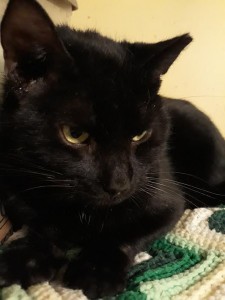 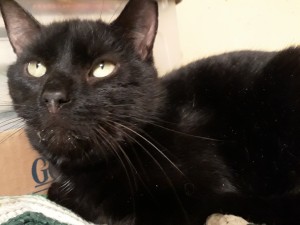