2/10/20 – Late last month a woman witnessed 2 dogs attacking another dog. Her boyfriend was able to scare the 2 dogs away and the dog being attacked, Joy, ran under a bush on their property, injured. The couple was too scared to handle a stray dog with injuries so they reached out to Make A Difference Rescue.

Joy was used for breeding, she had sagging nipples and her coat was in bad shape. She had bite wounds around her neck and ears and was just exhausted from the attack. The rescue got her to their vet where she was found to have several medical problems. First she’s heart worm positive, second she needs to be spayed, and third she has tumors on her paw that have to be removed and biopsied. And on top of all of that, she is between 8-9 years old. Our friend at the rescue told us that she is “about as sweet as they come”. The first priority is addressing the heart worm so we were contacted to see if we could help with that. We were happy to take care of that for this very sweet and abused animal.- diana
4paws1heart.org/donations/ 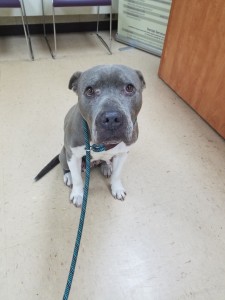