2/18/20 – Please pray for Blackie. Last night I got a call from Kimberly W. about a ‘feral’ dog who had been attacked and was taken to an emergency hospital who we no longer work with on a regular basis. His story is that he is one of many dogs who run the Mack Avenue corridor (Detroit) near the old Packard Plant, known for it’s abandonment and destruction over decades and for being the ‘home’ for many homeless people and animals. A kind woman from Warren has been feeding the dogs, including Blackie. She has known Blackie for about two years. She contacted our friend, Kimberly W., who truly is an animal angel, and told her that Blackie was attacked by other dogs and was in very bad shape. She was on her way to the emergency hospital. Thankfully, a vet tech, Lisa, who I’ve worked with in the past, contacted me once Blackie got there and was stabilized. The bottom line is that Blackie has severe new bite wounds and many old wounds that have ‘healed’ over. His ear has a gaping hole in eat from what appears to be a bite. He may have been hit by a car because his arm is very swollen. He is about 5-6 years old and the finder felt that Blackie had been a pet at one time who had either escaped or was dumped. I provided enough money last night that would cover medical until we knew more today. I talked with Lisa this morning and Blackie was given pain meds and antibiotics; his new wounds were also treated. This morning he will be assessed and will have x rays taken of his arm and possibly have a drainage tube installed. Although, his finder, said Blackie licked her hand through his muzzle and he has been kind during the years of feeding him, we really don’t know his temperament because he has been on pain meds. Hopefully, we will have more information later this morning and I will give you an update. Anyone who wants to help with Blackie’s care should donate directly to 4 paws 1 heart. Our hearts break for these animals on the streets. I pray that Blackie is one who can find a forever home and be loved for the rest of his life. – diana
4paws1heart.org/donations/ 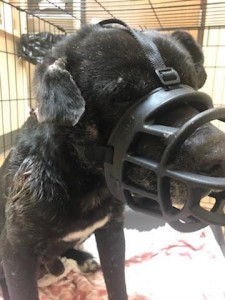 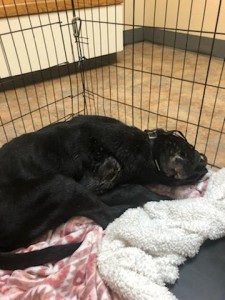