2/22/20 – 4 Paws 1 Heart will continue to pay for all of Blackie’s medical needs as we have done thus far during his stay at two emergency hospitals. Very often we offer to take care of medical needs in order to find a rescue who can provide the shelter and adoption opportunities. Our plans are to have Dr. Z take over Blackie’s medical care when he’s ready. Here is an update from Jayne of Michigan Animal Crew. We are very thankful for her support.- diana
4paws1heart.org/donations/
“Michigan Animal Crew is the rescue that took Blackie in. Blackie has been with me since his release from the hospital. Blackie is the quietest, calmest most gentle dog I have seen in a long time. He is missing an eye and it is clear from reviewing the injury that the eye removal was professionally done. Therefore, Blackie was an owned dog at one time. Blackie is potty and crate trained and gets along with dogs of all sizes but he is being kept separate to allow him to decompress and rest.. At this juncture, he is sleeping, eating, pooping, repeat until his injuries heal more. I caught him snoring yesterday afternoon as he was sprawled out on a huge dog bed covered in fuzzy blankets. Blackie’s injuries are worst than the photos depict (he has been attacked a lot and have many old and new wounds), a string embedded wound around his neck, missing much of his 2 ears (besides the 2 ear infections) and he still limps badly due to the shoulder and leg bites and injury. Blackie is also skinnier than the photos show but he is getting a lot of healthy food and will be fatter in no time. Remember he is heart worm positive and we will work on that once he is healthier. Will send photos when he wakes up”

2/20/20 – Blackie Update – Blackie left the hospital late this morning and is now resting quietly in a home with the president of the rescue. He is resting well but is continuing to limp and his wounds are much worse than you can see in the photos. He is very mild mannered. We will wait a week or two before starting his heart worm treatment so that he can have time to decompress. We also want to make sure that the injection method will not be too hard on his old body and heart. Thank you for your continued prayers. 4 Paws 1 Heart will continue to cover his medical until he is fully recovered. – Diana
4paws1heart.org/donations/ 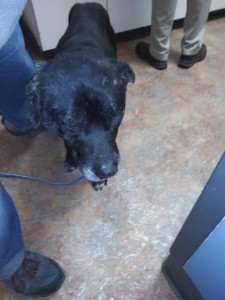