4/17/20 – Simon is the other amazing rescue that Shelley contacted me about. Simon was the result of a ‘backyard breeder’ who bred Siamese cats to sell them. The breeder contacted Shelley E. for help and Shelley contacted me. Simon was already cold, nearly stiff, and curled in a fetal position inside a bowl. When Shelley picked him up, she was confident that she didn’t have enough time to even get Simon to an emergency vet. So, after consulting with one of our many experts, Simon was taken to the founder of Purrfect Paws Kittens, Tracy Stiff, and Tracy took over from there. Tracy got up every hour over the next couple days while poor little Simon went through severe diarrhea and then constipation. But with fluids and lots of care, Simon turned the corner. Yesterday, Simon, although now seeming to be out of the woods, was taken to a vet where he was put on additional fluids, treated for malnourishment, given an enema and antibiotics. The little guy is estimated to be 8 weeks old but only weighs 1 lb. I spoke with Tracy today and Simon is doing much, much better. Little Simon will possibly be a special needs kitty for the rest of his life. 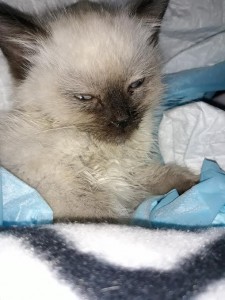 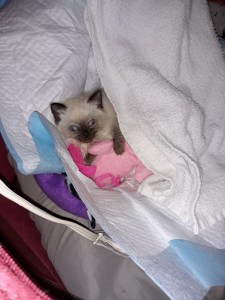