4/17/20 – RIP Chesterfield 7. He showed up during a TNR project. His flesh was rotting and he had a large gaping wound. Our friend Shelley E. had been trying to trap him and was finally successful when she contacted me yesterday. We were able to get him into a vet where he was humanely euthanized because his condition was too severe. There are so many of these poor animals on the street needing the help of all of us. There are so many heroes in our Country and those who don’t turn their backs on animals in need should be included. I should mention that this is the second rescue of Shelley’s in just a few days. See the next post for that case. – diana
4paws1heart.org/donations/ 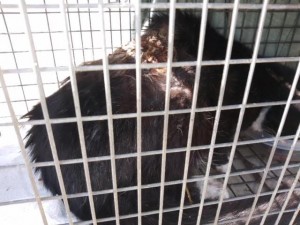