7/22/20 – RIP Miko. He was found in a trash bag which had been placed next to the work place of a very kind man who was committed to keeping him. The cat had a gash on his body and seemed unable to walk — overall he appeared to be in “pretty bad shape”. We were able to get him into one of our favorite doctors, Dr. Zalac, and when Miko arrived, his temperature wasn’t even registering. Dr. Z performed some tests and immediately put him on fluids which eventually helped raise his temperature slightly. Miko was kept overnight but by morning his temperature was again no longer registering. I spoke with Dr. Z this morning and Miko’s prognosis was very poor. He continued to only lay on his side and the doctor suspected brain damage from possible trauma which also may have caused the gash in his body. Dr. Z believed that anything that could be done other than what had been done already, which included more testing, would be more heroic and Miko would have a very small chance of survival or a quality of life. After consulting with the rescuer, it was decided to follow the doctor’s recommendation and let Miko cross the Rainbow Bridge.
Let me just say again that this has been a horrendous Spring and Summer for the animals. We continue to thank all of those people who don’t turn their backs on an animal in need and without our supporters, we would not be able to respond to the calls for help. – diana
4paws1heart.org/donations/ 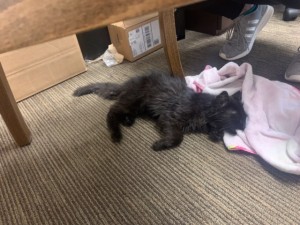