Skip to primary content
9/15/20 -Journey was around 2 months old and weighed about 2 pounds when he was rescued. He was one of many cats and kittens being fed on someone’s porch in Detroit. A neighbor noticed he needed medical attention and grabbed him off the porch, even though she knew she couldn’t care for him. With the help of another party, Journey was taken to a vet because of an eye issue and was given medication for his eye. He was tested and found negative for FIV/FeLIV.
However, nothing more was done. He had not been given any vaccines and when our friend, Patricia, took him in, he had a huge belly which indicated worms, and was also infested with fleas and ear mites. It also appeared that Journey had an upper respiratory infection. He also had abrasions on his nose.
Patricia contacted us and we made sure Journey’s medical issues were all addressed. Unfortunately, it was later determined that Journey would have to have his eye removed. This was done last week and now Journey is doing great and will go back to the vet next week to have his stitches removed and to be neutered and vaccinated. Journey is one of many kittens who Patricia now has and who we have committed to covering their medical needs. Anyone interested should contact Patricia at: pattib7355@aol.com – diana
4paws1heart.org/donations/ 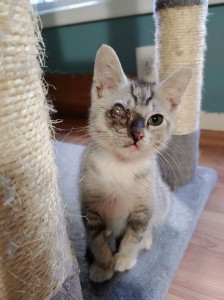 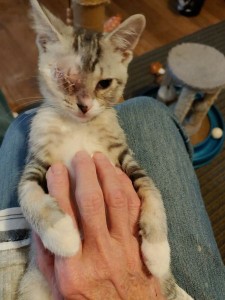