Skip to primary content
9/14/20 – Remember Charlize? Someone was going to throw her out of a car window but instead was handed over to a kind person who contacted the police. Her body had been burned with chemicals and we were contacted by the Eastpointe Chief Animal Control Officer. Charlize was taken to our partner emergency hospital and later went to a wonderful foster home. Last week I received a message from a kind woman who has a friend who makes a sells these beautifully hand-crafted beds. She had seen Charlize’s photos and thought that her burned little body would feel so good in this very soft and plush bed. The kind woman, Nancy, dropped of the bed on Sunday, my husband brought the bed to Charlize yesterday. And, here she is already attached and laying claim to her beautiful bed. There are so many wonderful people in this world; it’s unfortunate that too often, we only hear of the worse. – diana
4paws1heart.org/donations/ 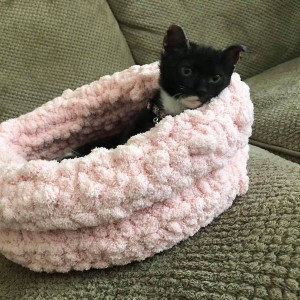 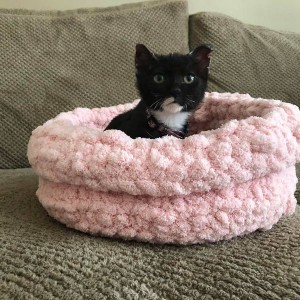