Skip to primary content
9/19/20 – Jeff’s second writing about his journey rescuing Tigress. – diana
“And here is the one I wrote today. – Jeff Moore
“The Waiting Is The Hardest Part”
My hand shook while I filled out the form in my car, granting my consent to the vet for her care. Tigress was in rough shape. I was worried about her prognosis and nervous that the vet would recommend euthanasia.
On our three-hour drive home from Sturgis the other day, where she was found outside, struggling to survive, the thought crossed my mind that her life was now in my hands and I, and only me, would have to determine her fate.
It was a heavy thought.
She hardly fought me as I put her in the pet carrier to take her to the vet. I wondered if that was a bad sign, perhaps she had accepted death and the release from the pain she had been feeling for quite some time.
On the short drive to the vet, she gazed at me with her sad, beautiful green eyes, as her nose watered and her tongue stuck out, drool running down her chin. She sneezed once or twice. She was pitiful looking.
I had to remain strong for her, I thought.
The vet technician came to get her out of the car and gently carried her into the office. Sadly, I had to remain in the car while they examined her.
The wait, a mere half hour, seemingly took up my entire morning.
I fiddled with my phone. I turned the radio on and off. I shooed a bee out of my car that had flown in through an open window. I watched an elderly lady in the car next to me pluck hairs from her chin while she waited for her dog, also inside.
Why was this taking so long, I asked myself, bracing for the worst news possible.
The door to the veterinary office shot open and out walked the vet technician who had taken Tigress in, minus Tigress.
I rolled my window down. It went down slowly despite me anxiously pressing on the button as hard as I ever have.
“We gave her a shot of antibiotics, her rabies vaccination and her distemper. She only has one tooth left so it will be a dry food diet going forward. She is not a fan of having her face touched,” the vet technician said, in the most matter-of-fact way, holding up her hand to show me where Tigress had scratched her. “I will bring her out to you in a few minutes.”
I felt stupid but quite relieved at the same time. My worrying was all for naught.
Tigress was a fighter, after all, having spent the past two years living outside. This would not be the day she crossed the Rainbow Bridge. Instead, we were on our way home to start her new life.” 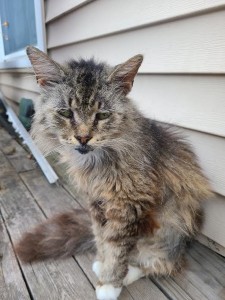