Skip to primary content
9/10/20 – RIP Sweet V. Late last night I received a call about a kitten found under a camper. The kitten was very lethargic, emaciated, and couldn’t lift her head. I authorized for her to be seen at Advanced Animal Emergency where she was immediately taken in and attempts were made to do blood work and to stabilize her. Unfortunately, the baby was so emaciated and her body temperature was so low, it took awhile before enough blood could be drawn. After further examination and analysis of the blood work, the doctor called me, as well as her rescuer, and advised us that V’s kidney levels were “off the chart” and that she believed that any further effort would just prolong the inevitable and put V in more distress. The doctor believed that V may have ingested poison like antifreeze or may have been born with a kidney issue. With the doctor’s recommendation, it was decided that V be allowed to cross the Rainbow Bridge. Every life is precious to all of us and each time we have to make a decision like this, it keeps us all up at night. – diana
4paws1heart.org/donations/ 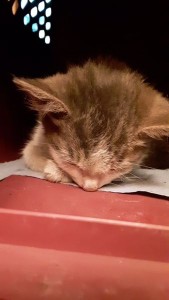