Skip to primary content
12/1/20 – As a follow up to the previous posting — during the same period we were woking on trapping the 10 cats called into us by Kelsey, another woman who works in the area contacted Kelsey to say she had rescued another kitten in the area. The kitten was very sick with what appeared to by an upper respiratory infection (URI). It was unknown if he could even see. Again, Ferndale Cat Shelter stepped up and made arrangements with a vet they work with to see the kitten, Little Dude, asap. We agreed to cover the costs. So, Little Dude, was seen and treated for a very serious URI and Kelsey took him home. He gradually improved and a co-worker of Kelsey became very interested in adopting him. She was willing to take on whatever he needed. Gradually, Little Dude started improving and it became obvious that he could see because he followed Kelsey everywhere she went.
Today – I got word from Kelsey that Little Dude – now Bandit – is in his new home and is doing great. His new mom is in absolute LOVE. His URI is clearing and the mom’s new vet will be handling everything from here on out.
Another life saved because of people with a common goal coming together!! – diana
4paws1heart.org/donations/ 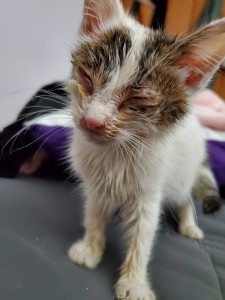 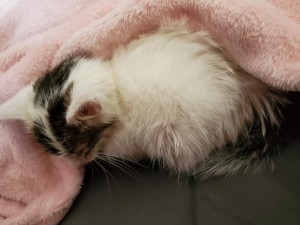