Skip to primary content
1/9/21 – I was first contacted about Sadie and her buddy, Gizmo in July, 2020. Their owners moved to Florida and left them behind in their home. It was difficult to get them into a vet because of the shut downs and backlogs but a doctor who has since retired got them in and took care of their immediate needs to be tested and vaccinated before going to a foster home. The other day I received the following message from Marci who was involved in the July rescue:
“She’s almost unforgettable, she’s so fat.

You helped me with her and a male named Gizmo. Their owners had gone to Florida, then decided to live in Florida for good. They didn’t want the cats. The new people moving into the house didn’t want them 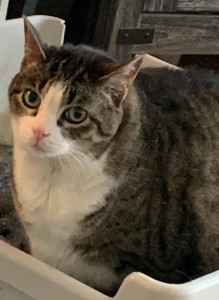 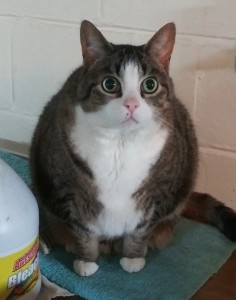 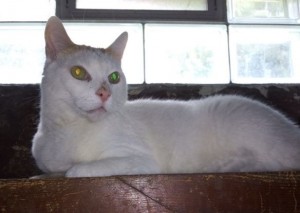 either, but had been leaving food & water for them. She said that’s when Sadie got so fat. Poor cat probably wasn’t sure if she’d get another meal. You covered their exams and vaccinations at Rakestraw. Both cats were already spayed/neutered. As I have a full basement, I took them in. Gizmo comes upstairs to roam around but Sadie hasn’t yet. She’ll sit on the landing thinking it over, then head back down. I haven’t done very well with getting her to lose some of that weight. She’s not a fan of laser pointers or toys. She’s my work in progress.

” She gave herself a hematoma. I have flushed her ears and, if it was from ear mites, I cannot tell. I am also treating with ointment. Do you ever cover the cost of surgery to fix ear hematomas? I understand that it rarely resolves on its own. – Marci”
Sadie has her surgery appointment scheduled for next Wednesday. The first photo is Sadie now. The next two are Sadie when she and Gizmo were rescued. Gizmo has been doing great in the home; as Marci said, Sadie is still reluctant. Far too many people believe that cats are not social creatures. They believe it’s ok to leave cats alone for days or forever. But just because some cats choose when to hang out with humans doesn’t mean they are not social animals. It is so very sad when an owner abandons their cats and they wind up living without any human interaction when they’ve been used to it. Praying that Sadie’s surgery goes well and that she can lose some weight. She may, in fact, be more social if her ear isn’t hurting any more. What we know for sure is that she is being loved and cared for. – diana
4paws1heart.org/donations/
Share