Skip to primary content
3/5/21 – And for an uplifting update–Ziggy who I posted about yesterday is doing much better. As you know, we were concerned that Ziggy may have contracted FIP. Fortunately, we were able to get Ziggy into one of our partner vets yesterday afternoon and just before going to the doctor, his rescuer, Dawn, noticed a huge wound under his arm, hidden by his fur. Ziggy got to the doctor’s office where he confirmed that Ziggy had a severe infection from a bite would which was causing his frightening symptoms. The little guy is definitely a fighter in that, the vet tech had to muzzle him and later on, when he got home, he bit his savior through her sweater. But all is well. He is taking his meds including ear drops. Last night he was much feistier, he crawled out of his box and went into the kitchen when he heard Dawn feeding the other cats. She could tell that the wound was causing him to hurt when he walked but we now know it will get better. He ate almost all of his food and we feel strongly that Ziggy is on the mend. Here is the wound. – diana
4paws1heart.org/donations/
YOUR $ SAVE LIVES 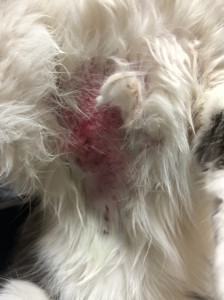