Skip to primary content
3/5/21 – And so it continues. RIP Very Sweet Nala. Last night I received a call from the emergency hospital who works with us. A very kind person had found a cat earlier in the day, lying on the side of I-69 in Capac, MI. The kitty who he named, Nala, was very emaciated and was having issues with her back legs. We authorized Nala to be seen and treated and she quickly started receiving fluids. The doctor estimated her to be 5-6 years old. X-Rays were taken because it appeared she had feeling in one back leg but was having difficulty moving her legs–if at all. The doctor saw what appeared to be a foreign object which may had been causing problems with her eating but she was still unsure until more tests could be done. Because she weighed just a little over 2 lbs. it was very difficult to draw blood but later in the night I received a call from the doctor. The doctor was still unsure of whether there was something foreign in her or if she had ingested something toxic, or was just so emaciated she couldn’t move. Her white blood cell count was very high indicating an infection and there was concern over her kidney levels. We agreed to continue supportive care to see how she made it through the night. This morning the doctor called to report that trauma to the spinal cord appeared to be the issue with Nala’s legs. Her kidney levels continued to be high and the fluids didn’t seem to be helping. The doctor felt that Nala was suffering and if and when she could have surgery, the likelihood of her surviving was very low. I spoke with the rescuer and he spoke with the doctor and it was agreed by all to let Nala cross the Rainbow Bridge. Our hearts break thinking about the many animals suffering on the streets in this bitter cold weather. And anyone who knows the area, Capac, which is in the Thumb, can get much nastier than in the areas around the ‘big city’. The area she was found was wide open with snow and ice still on the ground. We are grateful for the many amazing people like her rescuer, Daniel, who saved this ‘snuggler’ from suffering and dying on the streets. – diana
4paws1heart.org/donations 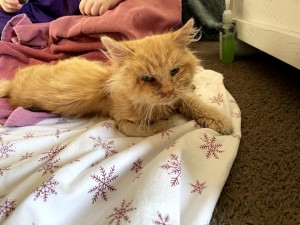