Skip to primary content
6/18/21 – On Wednesday, June 16, Stevie, Biscuit, and Dahlia (aka Fire, Wind, and Taurus had their eye surgeries performed by Dr. Blasses of Patterson Veterinary Hospital. While their rescuer, Patricia, was waiting in the parking lot she learned of a kitten, whose eyes had not yet opened, found with his tiny leg hanging. She immediately contacted me and I advised to get the baby and see if Dr. Blasses could see the baby that same day. Even with all of the craziness that veterinary staffs have been going through this past year and a half, Dr. Blasses saw the baby before closing. Here is Patricia’s report from the visit:
“Good morning! So our little dude, Jefferson is a fighter! Thanks to Patterson’s and you he has a fighting chance. As I said in a phone message, his leg was so dead all they had to do was snip it off at the femur. They put two staples in his wound.
Our only guess is he was attacked by something and can’t for the life of me figure out how he survived. He has a huge appetite and successfully sucks his milk on his own with a syringe, so right now, this little dude has a fighting chance. Glad it didn’t come down to amputation as I fear euthanasia would have been recommended which I was prepared for.Thank you for giving him a chance! – Patricia”
It is only because of the support of our many friends that we can help the rescuers give these babies a second chance. – diana
4paws1heart.org/donations/
“How we behave toward cats here below determines our status in heaven” – Robert A. Heinlein 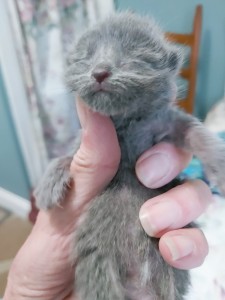