Skip to primary content
6/16/21 – RIP Moenart. He was rescued last summer by two women who do TNR on the east side of Detroit. He was was flea-ridden, had severe wounds on his neck, patches of hair missing, rotted teeth, and blood was seeping from his eye. But yet, he allowed the ladies to touch him. Melissa, who we’ve helped in the past, contacted us for help. Moenart was seen by our vets and was treated for infections, fleas, wounds, and was eventually neutered and vaccinated. Unfortunately, he was found to be FIV positive. And, although we were asked, we would not authorize him to be euthanized. Melissa and her friend vowed to keep him in a home and give him love so, over the past year, we took care of his medical needs. Then, this past Sunday, Melissa contacted me again asking for assistance with Moenart. He was lethargic, losing weight, and was having a hard time walking or even laying down. And, to me, the tell all, was that he was hiding. In my heart and prior experience with my own babies, this did not sound good and I authorized a visit to our vet who saw Moenart yesterday. The doctor found a huge tumor in his stomach and it looked like it was wrapped around the intestines. Moenart’s gums were pale and he was extremely lethargic and Melissa and the doctor agreed to let Moenart cross the Rainbow Bridge.
I’ve said this so many times in the last 10 years — May God bless the Rescuer. We don’t know the hardships Moenart faced in his short life but we do know he was very loved and safe for almost one year and did not leave this world suffering or tortured on the mean streets. – diana
4paws1heart.org/donations/
“Some angels don’t have wings, sometimes they have whiskers.” – Unknown 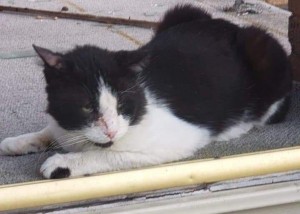 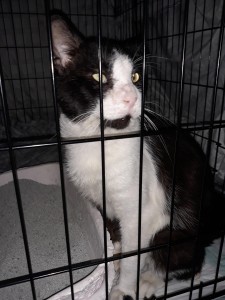