Today we say goodbye to a dear friend of 4 Paws 1 Heart and Gina DeLuca’s cousin, Josh Sheppard.  Josh always looked for ways to help 4 Paws 1 Heart and in February 2012 he adopted one of 3 kittens rescued by a good samaritan and fostered by Gina.  Josh named him Mr. Bill.  Mr. Bill traveled all over the country with Josh but, unfortunately, this past summer, Mr. Bill crossed the Rainbow Bridge.  Now Josh and his best buddy will again be together.  This is the film Josh created to help raise money for the abandoned and abused. 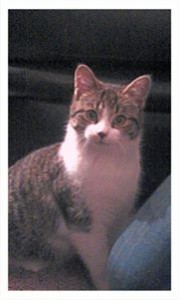