5/5/16 – Update on Lion: He was living outside as a ‘feral’. A kind woman fed him along with others. One day she noticed that he couldn’t use his back leg. She contacted us for help to trap him and to pay for him to be seen by a vet — she had been trying to get him for awhile. Although he was ‘friendly’ with her, it was difficult to tell whether Lion had been a lost/dumped pet or if he was truly feral. Our good friend, Debra B., was able to trap Lion and transport him to the vet. There it was found that his leg was broken and would need to be amputated; he was also found to be FIV positive. Not knowing whether Lion was domesticated or feral made our decision even harder. There was no way we would support placing a three-legged, FIV cat back out doors but we would also not let a cat with a broken leg, unable to defend himself, outside again. But after getting commitments from the caretaker and another friend in our Village, we decided to take a chance and go ahead with the amputation which would give Lion a second chance at a good life. Lion had his surgery on Tuesday of this week and here is the latest report from his temporary foster mom. If anyone is interested in fostering/adopting this boy, please contact Jo at joadd18@gmail.com ~ Diana

“Lion is doing very well in his recovery. He’s still a little out of it but is getting around good. He is using the litter box and he moves around to the different beds I have. He’s a tough cookie. Thank you for helping him on a new journey in his life. He loves getting petted and being talked to. Poor guy probably hasn’t had any love in a long time if at all.-Jo” 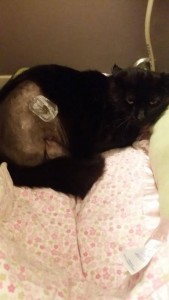