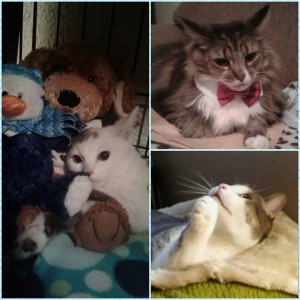 Please say a few prayers for our boys, Chance and Carlos. We love these little fighters!! ~ diana

Good morning Team! Sooo, Thankyou to 4 Paws 1 Heart mine & Carlos’ vet appointments have been set. Mine will be at 2:30 tomorrow to have my lumps rechecked and we are hoping for a good report.
Carlos’s appt is for 5:00 today to check the changes that we have noticed in his tail nub. For anybody unfamiliar with Carlos’s history, 4 Paws 1 Heart took Carlos under their wing about 6mo ago when he was abandoned at the vet with a huge tumor near the base of his tail that burst. He had his surgery to remove it and when it was sent out it came back to be Spindle Cell Sarcoma which is an aggressive cancer. He’s been doing great, but we recently noticed some changes in size in the nub of his tail, his tail was removed during his last, which was his second surgery for tumors. Anywho, we were told to watch for any changes and bring him in right away if there were any.
And thanks to the commitment 4 Paws 1 Heart made to Carlos, he will be able to get the care he needs.
Sooo, please keep me and Carlos in your prayers that my swollen lymphnodes have shrunk and Carlos’s swollen nub is not serious. We will let you know how our appointments go, thankyous for your love & support! Love, Chance & Carlos ❤🐯❤🐯