9/27/16 – Gizmo is one of many kittens and cats found in a home which was overwhelmed with rescued cats and kittens. The majority of the cats and kittens were very ill with upper respiratory infections, flea infestations which resulted in anemia, and ear mites. One of the babies, unfortunately, did not survive. This little guy was doing well until last week end when he was having problems breathing. His rescuer and foster mom, contacted us and we made arrangements for him to go to one of our favorite emergency hospitals, Advanced Animal Emergency, in Clinton Township. With the expertise of our very own Gina DeLuca and the skilled staff of the hospital, it was determined that Gizmo had food stuck in his esophagus. The blockage was removed and Gizmo is back to being the crazy kitty he was before the emergency. Your donations truly make miracles happen.Anyone interested in giving Gizmo a forever home, should contact Dee at deegudenau@gmail.com ~ diana 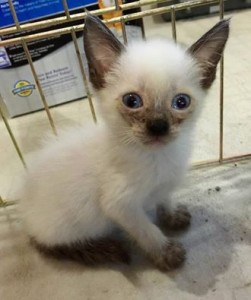