9/26/16 – Once again a generous benefactor has heard our plea for help and has offered to match up to $1,000 in donations received between September 26 and October 3. Please consider making a donation so that we can continue saving the lives of those who have been abandoned and abused like this sweet boy, Bowie. Donations can be made through paypal by using the donation link on this page or by mail at P.O. Box 84, St. Clair Shores, MI 48080
Bowie, a 2.5 year old neutered pit mix was first rescued from a high-kill shelter just before he was going to be killed. The rescuer did due diligence in seeking an adopter which included a meet and greet, reference check, and an adoption contract. The first call from the adopter was because the wife had problems with Bowie listening to her. The rescue hired a trainer to work with Bowie. Then fiive months later the adopter called saying that Bowie had urinated on her son’s car seat and that he would be taken to be “put to sleep” — or as I like to say KILLED. Bowie was returned to the rescuer and then it was found that the poor guy was heart worm positive. That is when we received the urgent call for help.
Bowie has started his heart worm treatment and is doing well. He will be looking for his forever, loving home. Please contact Michelle Carver at mbcarver7297@att.net if you are interested in fostering or adopting Bowie. ~ diana 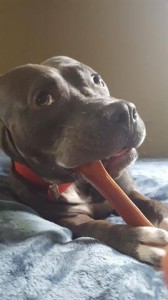 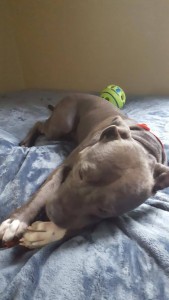