“PHOEBE – A friend of 4 Paws 1 Heart was walking out of the hospital he works at in Detroit. He heard a dog crying and saw a crowd of people gathered. As he approached the crowd he saw a dead puppy who looked like his body had been broken in half and next to him was another dog, crying in distress. Allegedly, the dead puppy was hit by a car but our friend believed otherwise. He immediately took the crying dog and brought her home. 4 Paws 1 Heart took care of her vetting and first round of vaccinations and we will pay for her spaying when she is old enough. She is about 10 – 13 weeks old.”

Well, her dad, Scott, contacted us to let us know that Phoebe is ready to be spayed. We were happy to keep our commitment to Phoebe and to make sure she lives a healthy and happy life. Here is Phoebe now and when she was rescued.~ diana

P.S. For those of you who wonder why Phoebe is just being spayed at 2 years old, I will say that many medical experts believe female dogs should not be spayed before they are 1 and 1/2 years old; males at one year. The research indicates that dogs (and cats) spayed/neutered too early are prone to behavioral and medical issues later in life. That being said, we all understand why animals are spayed/neutered much earlier in the realm of rescue. A primary concern is that no more unwanted puppies or kittens are born. 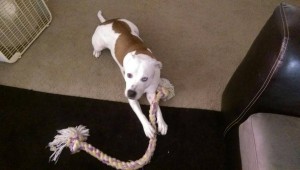 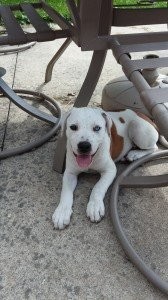