11/10/16 – Meet Kitty – She was found in September, softly meowing in a box, lying under a pile of leaves. It appeared she had been left there to be picked up with the trash. She was only a few weeks old and couldn’t seem to move. We were contacted for help and at the time we could only commit to a vet visit. She was taken to Dr. Wilson and it was suspected, this little baby had been stepped on. She had difficulty breathing and it was confirmed that some of her organs had been pushed together, against her ribs and that surgery would have to be done once she gained weight. She was estimated to be less than 3 weeks old. Kitty was just so sweet and just so sad, the rescuer made a commitment to raise money so that she could be saved. As our friends know, this has been a Summer and Fall of slow donations, so we could not commit to pay for the entire cost of the surgery but we did commit to pay 1/3. It is now 6 weeks later and Dr. Wilson believes she will be ready for her surgery November 23, 2016. Please pray for Kitty. In the six weeks she has been with her rescuers, they have grown to love her and her spirit. I wanted to give everyone enough time to say a few prayers and we will update you once the surgery is complete. ~ Diana 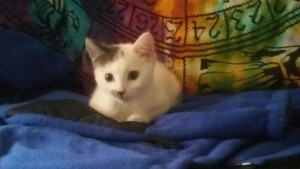