11/7/16 – Another Happy Update to Start Your Work Week: It is suspected that Odin was hit by a car. We so much appreciate Odin’s dad sharing his story with us and letting us know how Odin has changed his life. ~ diana

“The Tail of Two Lives Saved

Life isn’t given; it’s on lease. One day we’ll all have to repay that debt, some sooner than others. That debt collector gave me a warning in February. I was in a single car rollover accident on the freeway, according to the police report the accident spanned nearly the length of two football field. Due to the forces my body went through as I was unconscious I sustained multiple spinal injuries and severe brain injuries worst being massive axonal injuries and a stretched brain stem and shearing. Eight months later and I’m still dealing with the Brain damage, short term memory being the worst. Every day I wake up to the same nightmare of life that is slowly getting better until my best friend (SIC on purpose) realizes I’m up and immediately that nightmare feeling is gone. I wasn’t a person that believed in fate, that you have to play the cards you’re dealt or that everything happens for a reason…Until now.
I can’t remember much thinking back, but I’ll never forget seeing him on online. We had 2 rescued dogs already and never thought or even talked about getting another but something weird happened. My family members are into rescuing as are we and while scrolling I saw a Facebook post from 4 Paws 1 Heart my grandmother had shared there wasn’t much of a description of everything he had been through or if there was I don’t remember but I do remember contacting them immediately to enquire about him. I don’t know why, it was a random, spontaneous connection. I told my wife and she was confused as well thinking it was related to the brain injuries but with everything I was going through she went along with it.
We followed all of the adoption procedures and he was brought over for a face to face meet. That’s when I found out Odin had been with his Foster for quite a while because he was brought in to the Vet by a random stranger who found him in the road unable to get up or walk. It was discovered he had Neck/Head trauma causing spinal cord damage and vertebrae compression in the neck. Now back to fate as I’d mentioned above. A random post 2 months after my accident led me to spontaneously adopting a dog who turns out suffers from the same injuries as me. It was fate. 2 others before us had adopted him and he was either too much for them to take care of or they weren’t familiar with rescues animals in which most aren’t trusting of humans, so they returned him. Third time was the charm, he came to live with us and as with any rescue he needed work but he turned out to be my best friend and now 6 months later we live our lives of healing and recovery together. Both leases on life extended and we couldn’t be happier” 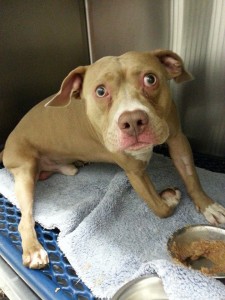 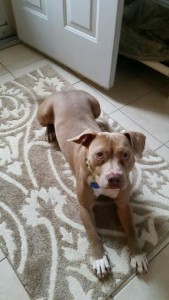