12/27/16 – RIP Sweet Maisy. An 8-month-old Jack Russell Terrier, Maisy was confiscated from a home 4 weeks after her owner had died. Maisy, along with her mother, Daisy, were two of the 17 animals that were also confiscated from the same home. According to the Rescue, Maisy was “acting like a typical puppy, playing, being bossy, cuddling, being goofy…till one day she just became ill”. Maisy had lost her appetite, and became very lethargic. The Rescue took Maisy to the veterinary and they found that she had a slightly enlarged heart, and had stage 4 out of 6 heart murmurs on both sides of her heart and her temperature was 104 degrees. But her blood work came back normal, except for her white blood cell count which was only slightly high. So, the doctor thought Maisy was fighting off some type of infection. At that point, the Rescue contacted us to see if we could help with Maisy’s increasing medical bills. Although we couldn’t commit to paying all of the bills, we agreed to make a sizable payment in hopes of giving Maisy a second chance at life and love. Over the next five days, Maisy seemed to be doing better and started eating again. But then, it wasn’t long before it started up again — vomiting, not eating, high temperature. She continued to be taken back and forth to the vet and, sadly, just 8 days after we were initially contacted, Maisy died. We know she is no longer suffering but it is always heartbreaking when no matter what is done, God just seems to have a different plan. We were glad we could offer some assistance to Care Rescue and we thank them for everything they did to give Maisy a good life and giving her love in her final days. ~ diana 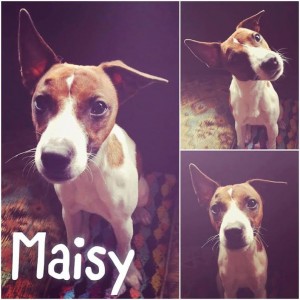