12/6/16 – I can’t tell you how many times I’ve been told by people that they are continually in awe of the number of animals who are abandoned and in need of help. And, we are just one organization. This little sweetie is Wayne. A good friend of ours has a daughter who attends Wayne State University and she found this little baby alone, wandering the streets. Shortly after taking in Wayne, our friend noticed that Wayne’s belly was very large; he was only about 3 lbs. He passed a lot of worms but his belly size did not decrease. He was taken to a vet. Tests, x-rays, and ultra sounds were done but no one could find why Wayne’s belly was so large. The vet did not seem to be concerned and said that Wayne could be neutered. When another vet was seen, that vet was concerned about the size of Wayne’s belly. They also found that Wayne had a bad case of gingivitis and estimated he was about 5 1/2 months old — yet, he was the size of a 3 month old — more tests were done. Nothing definitive was found but it was suggested that Wayne be given smaller amounts of food, more times a day. It is still unknown what might be going on with Wayne and he will be seeing a specialist. Our friend, who rescues many cats, has paid for most of Wayne’s medical but we agreed to help. Wayne is a very sweet boy who loves to sit on a lap and get petted. We do not want to imagine what Wayne’s life would have been like on the streets had he not been rescued. He is receiving much love and hopefully the specialist will be able to ensure that Wayne is on the road to full recovery. 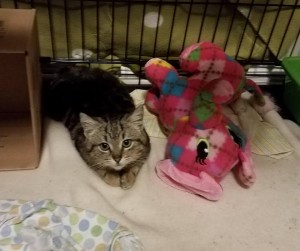