UPDATE 12/28/16: I called two days ago and was told that BayMax was doing well. The reason he was doing so well was because he didn’t have his surgery yet. For the last two days I’ve been trying to pay the bill but the veterinary staff has been very busy. Finally today, I called again, and the doctor came on the telephone to talk with me. It turned out that once the kind doctor at Groesbeck Animal Hospital actually examined BayMax, it was determined that BayMax does not have Entropion after all. BayMax has a birth defect named Eyelid Agenesis which means the eyelids never developed. Because the cost for surgery is much greater than for entropion surgery, the doctor has decided to take BayMax under his wing and cover the cost of surgery himself and possibly do a case study in that this is a very rare condition. The doctor felt we could use our money on another case (and I think the doctor was a little smitten with BayMax). The doctor will also make sure BayMax is adopted into a good home but, before that, the recovery time will be two to three months. The doctor assured me that BayMax is in good hands. ~ diana

12/28/16 – BayMax, at about 3-months old, was found alone on the streets with a severe upper respiratory infection. He was treated for that and a couple of weeks later, the foster called the Rescue to say she had been kicked out of her home and needed to find homes for BayMax and his sibling. She then cut all ties with the rescue who never heard from her again. By some miracle, the Rescue was looking at facebook and saw that a women had put out a call for help for two kittens that were ‘dumped’ on her. The Rescue recognized BayMax and his brother and immediately called the woman who posted for help. The Rescue was advised that she had taken BayMax to the vet because he seemed to be having trouble with his eyes. The vet failed to listen to the foster and misdiagnosed BayMax’s eye condition. He was then taken to another veterinarian who diagnosed Baymax with Entropion. Many of you may remember that I’ve talked about Entropion before in that we have paid for the surgery several times with rescue dogs. Up until now, I had not heard of any cats suffering from this condition which can cause blindness if left untreated as well as being very painful.
We are thankful that because of the generosity of our friends, we could commit to paying for BayMax’s eye surgery which was done two days ago. He is doing well. Please say a prayer that Baymax can start the new year in his very own, forever home. The little guy has been through a lot. If you are interested in giving this sweetie a home, contact Erin, Angels for Animals, at: angelsforanimals2@comcast.net ~ diana 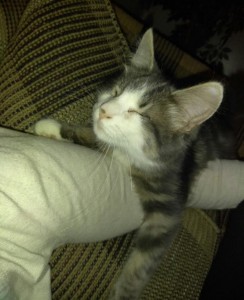 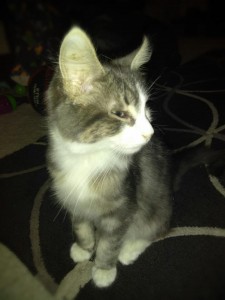