3/14/17 – Please say a prayer for Blue who had ACL surgery late yesterday. Blue is a 3 year old Mastiff who spent the first few months of his life in a very abusive home where he wasn’t fed and was often punished for getting in the trash. Eventually, the owners were jailed for some other offense and friends of the family took in Blue where he was loved for a while. Then the mom had to move and her son went into the Marines, leaving Blue to find another forever home. Some kind people heard of his plight and took him in only to find that the ACL in both legs were broken; one leg requiring immediate surgery. Poor Blue spent months in pain and unable to put weight on his back legs. He could only ‘hop’ around. Fortunately, with the partnership of some friends we were able to give Blue the help he needed and we are praying that his first surgery goes well so that the other can be scheduled in a timely fashion. ~ diana 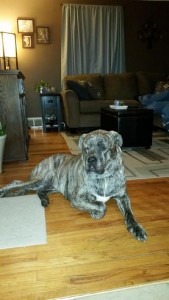