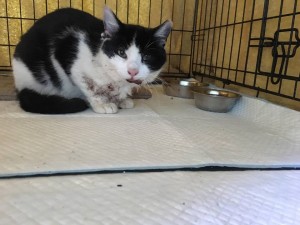 2/26/17 – It’s appropriate that on a Sunday I ask for your prayers for this sweetheart, Meadow. We were contacted by a group who has been working to trap/neuter/return cats at a condominium complex. The prior management was happy to work with the group in allowing them to care for the animals and do TNR. Unfortunately, a new management company is now in place and they have called in a company called “pest control” company to trap and remove the cats. It is our experience that companies like this will find a way to illegally kill the cats or to “transfer” them to an area where they will surely die cruel deaths because they are unfamiliar with the area. The rescue group is trying to save as many cats as possible but the management has ordered that all of their traps be removed. In the process of setting traps outside of the property, sweet Meadow, who is one of the tamer cats in the colony, was trapped. Meadow, under one year old, was already TNR’d but when she was trapped the second time, it was seen that her mouth was injured. The rescue group brought her to a vet who put her under anesthesia and gave her a penicillin and convenia antimicrobial injection plus a capstar and frontline treatment. The vet then said that she needed a surgical consult because some skin is gone and it need to be determined if other skin could be pulled up and stitched to cover that part of her bottom lip. Meadow was taken to Wilson Veterinary where it was decided that a skin graft would be performed. But, in the process, of further examination, it was found that Meadow’s jaw had been broken and healed — although not properly. The options are to re-break the jaw, or just remove a couple of teeth which might help the alignment. It was decided to keep Meadow’s pain to a minimum and just remove the teeth when the skin graft is performed. She has been in the hospital waiting for surgery for about 5 days and is able to drink and eat. We are hoping that surgery will be done this weekend so that Meadow can be on the road to recovery. 4 Paws 1 Heart is committed to Meadow and will do whatever we can to help the rescue with their continuing TNR. Donations can be made by using the donate link on this page, our donate link on our website 4 Paws1heart.org, or by mail at P.O. Box 84, St. Clair Shores, MI . 48080 . Thank you ~ diana

2/26/17 Update: Meadow had her surgery this morning and was doing well. She will be kept another day, with hopes of being released tomorrow. Also, it appears that the owners of the complex may be willing to work with the rescuers unlike the management company. More to follow. – diana