2/27/17 – We’ve helped this handsome guy a few times since he was first rescued last summer and we are happy that we could be there for him again during a recent emergency. I am so thankful for our supporters who make this possible as well as the veterinarians who are willing to work with us, and, of course, those individuals who put everything aside to save the abandoned and abused. Here is a report from Thorin’s rescuer and foster mom. ~ diana
“We have had a rough week of ups and downs. This is our sweet rescue Thorin, now approx 8 years old, diagnosed last summer with Glaucoma. We had to make an emergency trip to the vets…thank you Diana and 4paws1heart for your help….he was not able to urinate and knowing he is FIV, I was alarmed watching him attempt over and over again, going from one litter box to the other in a state of panic. We rushed him to the vets, he was examined and found to not have a large bladder, but did discover a very thick lining. Lol, after poking and prodding, yep….he let out a stream, which made us both laugh. Good, as she needed a urine sample! After tests and blood work which ruled out crystals, kidney and liver problems, we are giving him antibiotics for possible infection and pain meds to calm him down so he doesn’t panic. We are also putting him on a Royal Canin wet food diet to get more moisture into his system. So far he is responding well.” 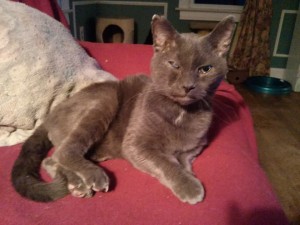