7/25/17 UPDATE: The 4 orange babies were seen at Patterson this morning. They were given eye ointment and were treated for fleas and worms. The two who are most ill may need to have an eye removed. They will be seen again within the next two weeks. Paws crossed and prayers that won’t have to happen. – diana

7/24/17 – Please pray for these babies. I was contacted yesterday about 6 kittens rescued from a person’s backyard. All of them were sick, a couple of them more than the others. The rescuer not only needed medical assistance but needed help with placement because her family was leaving for vacation today. With much wrangling and phone calls to as many friends as I could think of, a plan was made. The rescuer had contacted Wilson’s Veterinary who said they would hold the kittens BUT if we could not find a foster, all of the kittens would be picked up the next day (today) by animal control. In the condition they were in, there was a good chance they would be euthanized if that happened. I agreed to pay for the kittens to be examined — at emergency prices — and to be treated. My dilemma was to pay for the medical which would be between $800 and $1,000 only to have them killed the next day or to take a chance that we could find someone to take these poor, sick babies in. God was with us because our good friend Jo Addington agreed to take in all 6 and our very good friend, Debra Berolatti agreed to pick them up this morning and take them to Jo’s. Once picked up from the vet, Debra and Chance’s mom, Denise, also spent time at Jo’s house cleaning their eyes and making sure they were comfortable. The photos here are of them before they had been cleaned up. Tomorrow, four of them will be taken to Patterson Veterinary Hospital and the two grey babies will be cared for by our friend Patricia Brown and her wonderful daughter, Bree. I know I’ve said this before, but rescue is not a singular effort; it truly takes a village. Also, please note that as fast as the donations come in, the donations go out. If anyone has any money to spare, please help with the medical care for these babies. There are also two more (one caught and one more to go) being fostered elsewhere. Donations can be made on this page or by mail at P.O. Box 84, St. Clair Shores, MI . 48080. ~ diana 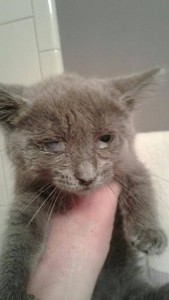 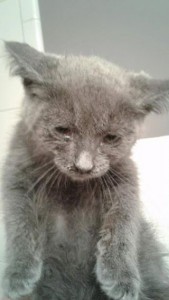 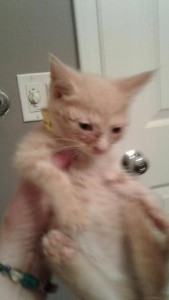 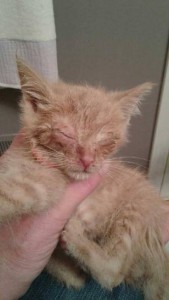 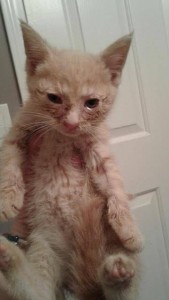 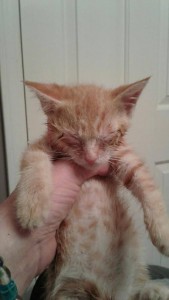