7/20/17 – RIP Sweet Boy. Our good friend, Charlotte Y., who is actively involved in TNR (trap/neuter/return) had been trying to trap this very sick boy for quite a while. She was finally able to do that last week where it was found that he had a large salivatory abscess on his chin. Not wanting to bother me during the time of my mom’s services, she paid for the vet visit where the abscess was lanced and treated but the vet warned that the abscess could return. Because this boy was very feral, he was returned to the wild after being treated. Within one week, he was again seen with another abscess. There was much concern that he would not fall for the trap again but Tuesday night he went in and was taken to emergency. Unfortunately, it was determined that humane euthanasia was the best option for this poor soul. He is no longer in pain and never has to worry about food or shelter again. ~ diana 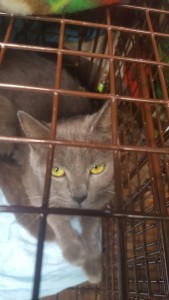