“Chance was found by my Uncle, at my Grandma’s birthday party at a hall. Chance was outside licking the sweat from a can, she was very friendly and approached my uncle. He brought her inside during the festivities, and we fed her and gave her water. She had some superficial injuries and was also emaciated, I had cat food and water bottles and bowls in my trunk which we gave to her. The vet estimated Chance to be about 5 years old and a spayed female, however, there is no tattoo, so it is hard to say whether she is spayed or not. There does seem to be somewhat of a faded scar on her abdomen. My uncle then told me he could watch her overnight while I found placement. I brought food and a litter box to his house for Chance. He thought he may have been interested in keeping her and it did not work out. I then went and got Chance and brought her home to my house, where she will remain until she is healthy enough for adoption. She is showing signs of excessive thirst and dehydration. The vet examined her, she has gone to Centerline Vet once for boosters, and then again for her second round of deworming, where ear drops were also prescribed. Chance also has a tail flick that she does sometimes that appears to be some kind of nerve damage or muscle spasm. Possibly from her injuries, the vet requested I get this instance on video and send it to Centerline Vet by email as Chance does not do this all of the time and was not doing it at the vet office, the doctor will assess that from there”. 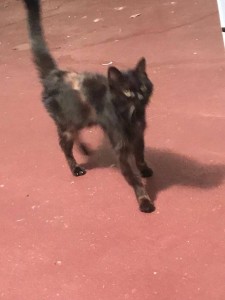 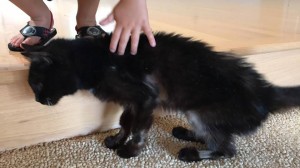 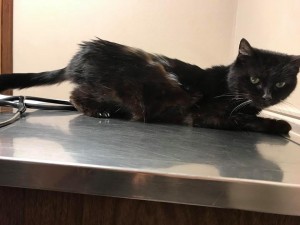 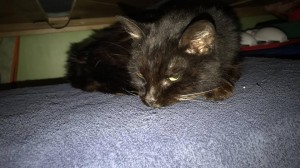 “Chance update:
Chance is in pretty rough shape, she has been diagnosed with Feline hepatic lipidosis, a liver disease, which occurs when a cat stops eating which may have happened after her injuries or have been caused due to infection, she is also anemic. Good news is she has a 50/50 CHANCE at reversing the liver disease through daily medications and a special diet. She is still spunky, so everyone send them prayers that we can get her through this…. she’ll need a home when she does!!

😁 A HUGE thank you to 4 Paws 1 Heart got agreeing to continue treatment! – Cortney”