11/13/17 – Ruby is a puppy that was found at the end of June running the streets of Grand blanc by someone who claimed to have “rescued” her. It was reported that if placement wasn’t found, the ‘rescuer’ would be releasing her.
Ruby was covered in scabs; half of her right ear was missing. She was scrawny and malnourished; her collar was so tight it left a sore on her neck and she was scared of everything. Friends of Scooby Rescue was contacted for help.
A foster was found and this scared female was named ‘Ruby’. At Ruby’s first vet visit it was discovered that the scabs were from demodex mange. She was given her first set of vaccines, dewormed, given anti-biotics for all of her open sores and set up for mange treatment.
She has since received her final vaccines, finished the mange treatment, been given the all clear health wise and started on heartworm prevention. She has flat feet from spending to much time in a crate as a young puppy – proper nutrition, vitamins and exercise have made a huge difference already. Once she is healed from her spay she will be ready for adoption.
4 Paws 1 Heart was happy to assist our friends at Friends of Scooby Rescue with Ruby’s medical. Anyone interested in this sweetheart should contact Megan at: mnb.dog@gmail.com 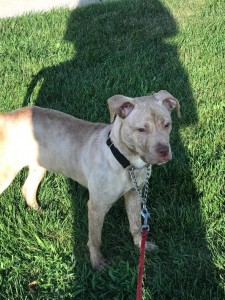