4/6/18 – Please say a little prayer for this very sweet girl, Frankie. It was early January when I was contacted by Jamie. She found this very sweet kitty on the side of the road, nearly frozen. Frankly could hardly use her back legs, her ears were scabbed, her tail and feet looked frozen. Her whiskers were icicles. We had Jamie seen by a vet very quickly and since then our little survivor has gone through a lot. As Frankie began to thaw out, her feet started to bleed and her frost bitten ears continued to scab. It also appeared that her tail had been frost bitten but seemed to be healing. Between January and this past week, Frankie was seen by a few vets, was spayed, vaccinated but tested positive for FIV. Nonetheless, Jamie, was determined to either find Frankie a purrfect home or keep her if all went well with her cat. Jamie kept in contact with me and about a week ago, I suggested that Frankie’s tail be examined again just to make sure it was healing properly; she kept licking it. Last week, Frankie saw a vet and everything appeared to be good. Wednesday, I got a frantic call that Jamie had gotten home from work and Frankie’s tail was “hanging” by a piece of skin. Fast forward to the emergency hospital and Frankie’s tail was amputated. There was a strong concern that Frankie could become sepsis if surgery and treatment was not done immediately. Frankie is now home and resting with mom and her new sister. We are going to keep a close eye on Frankie and make sure her recovery is complete.

I’ve said this before but when we take on the recovery of an animal we stay committed. Frankie started off as a very frost bitten stray animal who was close to death and until I felt she was totally in the clear from that issue, we would be there for her. But this commitment does have a cost, especially when it results in emergency surgery. So, if you can, please make a donation in Frankie’s honor. You can always be assured that your hard-earned dollars go directly to giving an animal like Frankie a second chance at life.

Donations can be made by using the ‘donate’ link on the left side of this page, through our website: 4paws1heart.org or by mail at P.O. Box 84, St. Clair Shores, MI 48080. Thank You from the bottom of our hearts. 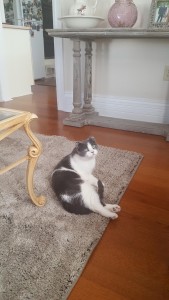 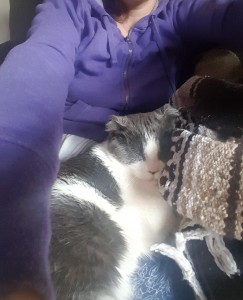