4/5/18 – The history is sketchy. What we do know is that at one time Lucy was adopted from a rescue who has a ‘no-declaw’ agreement. After some unknown period, the adopters wanted to return the cat because she was not always using the litter box. The rescue refused to take her back because the adopter had altered (declawed) the cat against the agreement AND the adopter didn’t want her either. Thankfully, a rescue we work with took Lucy in before she was taken to a ‘kill-shelter’. Poor Lucy is now acting very feral and hissing although we have to believe she was not this way when she was first adopted out. It’s difficult to know what Lucy has been through in that none of the stories seem to add up but the bottom line is she is now with a rescuer who will try to help her. 4 Paws 1 Heart paid for her to be tested, vaccinated, and examined. We are praying that with proper socializing and care, Lucy’s behavior changes in that she could never be let outside without having claws. ~ diana 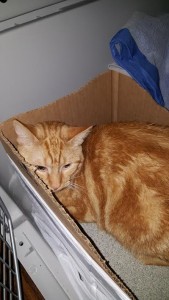