4/4/18 – RIP Sweet Kate. Kate is actually a boy who was being cared for over a seven year period. Although Kate was very feral, he wasn’t an aggressor but unfortunately showed up with many scrapes over the years. He recently showed up with very swollen jowls and was not eating and drinking as normal. He had dried green pus all over his body from what appeared to be a ruptured abscess on his body. For seven years, Kate remained elusive to being trapped but finally, this week end, he could hardly stand and fell down three times trying to get into the shelter that was put out for him. His caretaker was able to get him and Kate was taken to the vet. Kate was in very, very bad shape. He tested positive for FIV and FeLV. Every tooth in his mouth was rotten and his body was very scarred. It was recommended by the doctor that Kate be humanely euthanized and his caretaker agreed. We truly wish we could save every animal who comes our way. But, if we can’t save them, we can at least end their suffering and give them love in the end. ~ diana 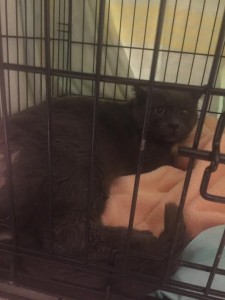